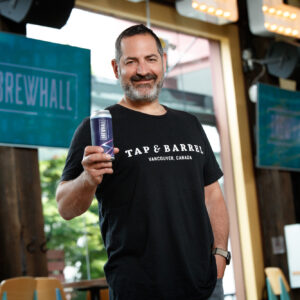 Throughout his life, Daniel has always been both an entrepreneur and an artist. While in high school, Daniel started an ice cream cart business and worked on his art career, selling artwork to his parent’s network of friends, and securing art shows at galleries. After graduating from the University of Western Ontario, Daniel tried to fuse his love of art and entrepreneurship by starting a film and video production company. After several years of production work, Daniel decided that it was time to pivot, and in 2001, he opened a coffee shop. This was the launchpad to his hospitality career.

Over the course of the next decade, Daniel opened and operated a myriad of businesses, spanning from retail, to catering and even fine dining. These included Delilah’s, Stanley Park Pavilion, Prospect Point Cafe & Gifts, the Pirate Pub, The Mill Marine Bistro, and Stanley’s Bar & Grill. Having built a company comprised of stand-alone businesses, Daniel saw the benefit of creating a brand that he could scale. In 2012, he began the process of liquidating some of his businesses while establishing the restaurant brand that he had been dreaming up: Tap & Barrel.

Over the next decade, Tap & Barrel established a highly respected brand presence. By the end of 2023, the company will operate eight locations with many more in the pipeline. The restaurants are well known for their large, marquee locations, environmental stewardship, staunch support of local purveyors, and their commitment to developing great leadership and to helping their people achieve their dreams.

Daniel is an inductee of the B.C. Restaurant Hall of Fame, a recipient of the prestigious Ernst & Young ‘Entrepreneur of the Year’ Awards, and an alumnus of BC Business’s ‘Top 40 Under 40’. In 2022 Daniel was added to the BC500 publication, citing the 500 most influential business leaders in British Columbia. Tap & Barrel Group is a long-standing recipient of Deloitte’s ‘Best Managed Companies’. Daniel is currently finalizing his e-MBA from Harvard Business School through the YPO President’s Program, which he has attended for eight years as part of his commitment to lifelong learning and will graduate in 2023. He currently serves on the executive board of YPO BC Chapter and is co-learning officer. Daniel is passionate about the arts; he continues to paint and loves to play guitar. He is also an avid art collector, cyclist, skier, a One-Wheeler, and a wanna-be pickle baller.

For more information about Tap & Barrel please visit www.tapandbarrel.com and @tapandbarrel on social media. Daniel can be found at @dgbars on Instagram and Twitter.