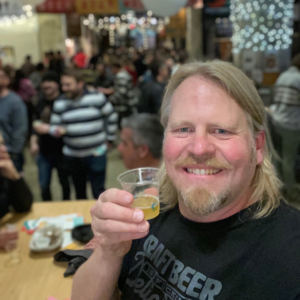 The “Thirsty Writer,” Joe Wiebe is a co-founder and Beer Director of Victoria Beer Week, which takes place annually each spring, and co-founder of the BC Ale Trail, for which he is the Content Manager. A graduate of UBC’s MFA Creative Writing program, Joe has been a freelance writer for 20 years, writing hundreds of articles on a wide range of subjects including arts and culture, sports, business and travel. Since 2008 he has mainly written about craft beer in a wide variety of publications. He is the author of Craft Beer Revolution: The Insider’s Guide to B.C. Breweries, which was a B.C. bestseller in 2013 and won the Gourmand Award for Best Beer Book in Canada. Joe is a beer columnist for CBC Radio, and often appears on other radio and TV shows as a craft beer expert. He emceed the Canadian Brewing Awards and regularly hosts panel discussions and beer seminars in venues throughout British Columbia. Joe has participated as a judge at the Canada Beer Cup and the BC Beer Awards, and is the Head Judge for the Okanagan Fest of Ale.