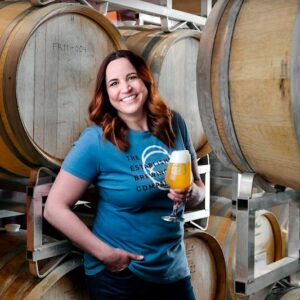 With over a decade of experience spanning production, education, sales, and hospitality, Natasha (she/her) manages the production of award-winning beer including an extensive mixed culture fermentation barrel program at The Establishment Brewing Company in Calgary, AB. The path to Production Manager began in a home brew shop while simultaneously working as a craft beer sales representative. The next challenge as Brand Manager and beer buyer for National Beer Hall in Calgary led to a jump to the production side in 2017 with Bomber Brewing and later Tool Shed Brewing and Last Best Brewing & Distilling.

Natasha also holds Advanced Cicerone® certification – one of only 2 in Alberta, and 156 in the world – and regularly judges both professional and homebrew competitions. As an active member of the Pink Boots Society, she co-created the hop blend used for Pink Boots Brew Day 2019 and most recently co-founded and serves as President of the Canada chapter, which is developing programming and opportunities specific to its local members